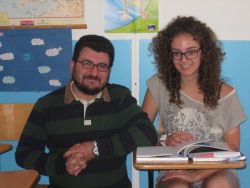 in the International Student Competition for the promotion of the German Language by the German Embassy of Athens in March 2014.

Konstantina is only 15 years old, an excellent student with a remarkable performance not only at the Greek School (3rd Junior High School of Pirgos, Ileias), but also at the European Center of Language Studies-Miranta Merkouri in Pirgos, Ileias, where she has been attending classes for English and German.

Her Level of English is Proficiency, and she has just sat the Exam in May 2014. Her level of German is B1, which she passed with distinction in February 2014, and she is sitting the B2 Exam in September 2014.

It is worth mentioning that her progress in the German Language is significant since she has been studying only for 4 years and she has been taking classes for
1 ½ hours a week.

Our heartiest congratulations on her achievement!

I am sure we will be seeing and hearing a great deal more about her success in the future.

See the announcement of the German Embassy regarding the competition.